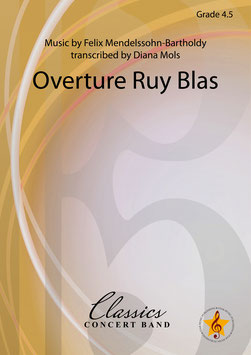 This overture is the result of a request to Mendelssohn from the Leipzig Theatrical Pension Fund, a charity that Mendelssohn liked to support. They intended to mount a benefit performance of Victor Hugo's ‘Ruy Blas’, and asked him for an overture and a song for the production.

Mendelssohn obliged with a choral song, but initially demurred as to the overture; having read the play he privately decided that it was "quite ghastly" and politely told the Pension Fund people that he did not have time to write an overture. Then he thought the situation over and realized that he had left the impression that he could not write an overture in the space of a few months. His competitive nature flared up, and he wrote the overture in three days.

The overture is a blood-and-thunder affair of generalized Romantic era emotionalism, with a troubled introduction, a furious opening theme, a tense second subject, and a lot of violence in working out. Bombastic? Unusually for Mendelssohn, absolutely yes. But it is effective and a good curtain raiser. Incidentally, Mendelssohn never changed his mind about the play, and preferred to call this work the "Theatrical Pension Fund Overture."

About shipping outside Japan