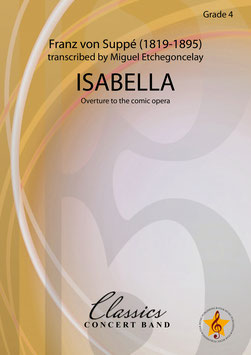 ISABELLA Overture to the comic opera

Austrian composer, Franz von Suppé (18 April 1819 – 21 May 1895), composed more than thirty operettas as well as dozens of ballets and stage works. Despite this fact, his stage productions remain rather unknown today with the exception of some operettas, such as Boccaccio or Die Schöne Galathée, and especially some overtures, which are a major feature of his stage works. Among the latter, belong undoubtedly Dichter und Bauer (Poet and Peasant from 1846) and Leichte Kavallerie (Light Cavalry, from 1866), who attained immense popularity; securing Franz von Suppé an enduring fame in the concert hall.

Suppé was a master in blending the three main styles of his time, the French opéra-comique, the Italian opera buffa and that of his city of adoption, Vienna. His classical training and his rich experience as a theatre orchestra conductor made of him an irresistible figure of his time. Although Suppé’s music does not sound particularly Viennese, they are rather international as you will see in this overture. Isabella, a comic opera in one act, was first performed at Carl Theater in Vienna on the 5th of November 1869. The librettist was Joseph Weyl, a well-known poet who also collaborated with Johann Strauss. The story is conveyed by a Spanish flavour in the introduction of the overture. This is interrupted by a brief lyrical bassoon solo, before moving into a brilliant march. An inevitable Viennese waltz is unfolded before the return to the Spanish colour.

For the performance of this transcription, some slight changes in the articulation signs have been introduced in order to make the music more suitable for the wind band. The conductor should strive to achieve an overall light and fresh style of execution and be very careful with the balance. Suppé’s use of «block dynamics» has been respected but the markings were slightly reviewed for the same reasons explained above. The percussion section has been enhanced, but remains fairly faithful to the original scoring. The tempo markings and character indications are also original, with an exception of that of the final march, marked here quarter note 132, instead of quarter note 144, to favour clarity of execution.

About shipping outside Japan